In an effort to help sustain awareness of the recent devastation in Japan and to help raise money for its relief efforts The Rentals have teamed up with the American Red Cross Ð Los Angeles Region and Ernest Jenning Record Co. to announce the release of Resilience, an album featuring 18 orchestral compositions written, arranged and performed by Lauren Chipman and Matt Sharp (former bassist and original founding member of Weezer).

All profits from the sale of this album will go directly to the disaster relief efforts in Japan.

The album was originally recorded as part of Songs About Time, a photography, film, and music project that brought together a large group of accomplished artists who devoted themselves for 365 continuous days to create what the Germans call Gesamtkunstwerk-a total work of art. Originally titled Tokyo Blues, the album is a collection of eighteen original scores that were composed for the films of Songs About Time.

The original title of the album was inspired by Japanese author Haruki Murakami's fifth novel, 'Norwegian Wood', which was re-titled 'Tokio Blues' for the Spanish translation. And now, appropriately enough, what was once Tokyo Blues has become Resilience. 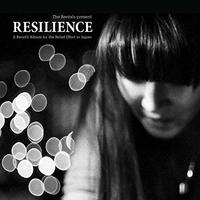