The Quick Fix Kills' "Novel Weapons" EP is an unrelenting ride that's as tough as it is inventive. And the NJ based quintet is just getting started.

Hailing from Cleveland and New York with too many pit stops and former bands along the way to mention, The Quick Fix Kills formed in early 2000 and they haven't slowed down their insistent onslaught since. Drawing early inspiration from acts like Lungfish, Quicksand, and Unwound, the members tore apart their influences and built up an evil-tinged approach all their own. Well-received live performances all along the East Coast helped build the group's reputation for pummeling listeners with sheer volume and dead-on musicianship, and after a year it seemed due time to commit their musical misdeeds to tape. Recorded by Don Zientra (Fugazi, The Dismemberment Plan, Q And Not U) at Inner Ear Studios in August of 2001, and mastered by Chad Clark (Smart Went Crazy, Beauty Pill), "Novel Weapons" is a post-hardcore battle cry augmented by strong production, edgy songwriting and aggressive lyrics.

Wrapping dissonantly intense guitar lines with fierce low end and propulsive drumming, The Quick Fix Kills toss aside the idea of soothing rock and instead demand the attention of anyone who crosses their path. Leading the revolution is vocalist Mark Moody, whose taunting spoken diatribes give way to inspired howls over the band's continuously mutating rhythms. From the overwhelming aggression of "Wit's End" to the sinister grooves of "Evil Has Legs," The Quick Fix Kills repeatedly pull you up just to knock you down again - a dedicated task most bands are too lazy to bother with.

Ernest Jenning Record Co. is proud to be unleashing the band on an unsuspecting audience, and with plenty of upcoming shows and an ever-evolving live presence, it's about time to get acquainted with this inspired group. Their mission is simple and it involves a mere two steps: To kick your ass…and to kick your ass. 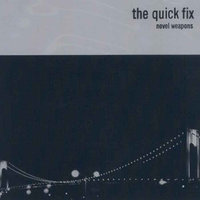