"I think musical ideas are almost alive in a way," says Alex Tween, keyboardist and lead singer of The Forms, the New York-based duo. "Some of them, especially the good ones, will simply not go away until they have been sufficiently expressed. They haunt you like ghosts and refuse to leave you alone until they've been fulfilled."

On Derealization, their new EP, The Forms have taken some of the most compelling ideas from their previous releases and completely recreated them, enlisting the help of some of their favorite musicians, from The National's Matt Berninger to Shudder To Think's Craig Wedren. The result is an astonishingly original new sound.

"It started as an accident," explains Matt Walsh, the multi-instrumentalist and producer who is the other half of The Forms. "We had just received the vinyl of our last record. I was so excited that I dropped the needle down without checking the speed on the turntable, which was set to 45 instead of 33. Immediately, we were blown away at how the songs took on a whole new character at that speed. We spent that afternoon listening to the record at different speeds and made the decision on the spot to do a 'remix album.'"

But Derealization turned into something much more ambitious: a transformation of existing compositions into hybridized combinations of new and old. Melodies and lyrics from the bands' two previous records - Icarus and The Forms - provide the basis for the six tracks on Derealization. But the ideas have been pushed farther, distilled to their essence and then fleshed out and augmented with new arrangements, chord progressions and words.

It was an intense process of deconstructing and recombining, all of which took place in a new studio in Ridgewood, Queens, which Walsh designed and built himself. The duo recorded Derealization there with producer Scott Solter (Superchunk, St. Vincent). "The sound on this record is much more aestheticized and more fully formed than on our first two records," says Walsh. "We have always been into mystery in music. We always wanted the listener to get into the shape of the music, and let that shape speak to her. But this time, we set about creating a more specific, almost visual world within each song."

To help achieve that goal, Tween and Walsh called on a group of high-profile musicians to collaborate on particular tracks, including a string section that features Daniel Hart of St. Vincent and Nat Baldwin of Dirty Projectors. The most dramatic contributions are guest vocals by three singers who re-worked Tween's original vocal lines to fit their own distinctive styles. Matt Berninger of The National sings the opening track, "Fire To The Ground," imbuing the existing melody with a richer, more sonorous tone. Andrew Thiboldeaux of Pattern Is Movement adds layer upon layer of harmony to his lead vocal on "Steady Hand," creating an almost dizzying gospel chorus effect. And "Finally" features a virtuoso vocal performance by Craig Wedren of Shudder To Think, a band The Forms consider a source of musical inspiration. "I had been struggling with that song for months," said Tween. "Craig took it, and within two days he had added these heavenly vocal parts."

The Forms are planning a North American tour in support of the new EP, which will be released on February 15th, 2011. In the meantime, they are looking forward to introducing their new sound to long-time fans and new listeners, as well. "I think Derealization includes some of the best ideas that we've had over the years," says Tween. "In the case of pretty much every song, I think we have finally been able to properly fulfill them." 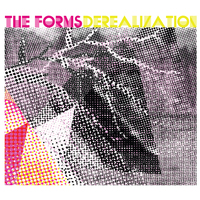