T A X P A Y E R is horrified of death and even more scared that what little life they have will be spent rotting away in a cubicle. So they made a record, a good one, about these very fears. They recorded the record in the hours they could escape, only tracking in the fleeting darkness between 11pm and 7am. I’ll Do My Best To Stay Healthy is the sound of hating your day job.

The rest is simple. Jared Marsh’s self-conscious and hook riddled lyrics are hard to ignore on paper, and when backed by his unexpectedly confident voice, the effect is unarguable. Taxpayer backs it up with deep rhythm section grooves that give way to melodic choruses and spacey guitar work. Think Queens of the Stone Age interpreted by Radiohead and expect the same quality of song and sound. Just because you aren’t on a major label budget doesn’t mean your record shouldn’t sound as good.


The band may be new, but the members have been playing together for years in various incarnations, sharing the stage with Joan of Arc, Ted Leo, Geoff Farina, Rainer Maria, and Cave In. The live show is a series of trance inducing grooves interrupted by static bursts and soaring vocals that will lodge themselves in your memory for weeks. As far as we can tell, that’s a good thing.
We’re all taxpayers (unless you’ve managed to get off the grid, in which case we salute you) and this record is a unifying call. Fanfare for the Common Man 2004. A jarring lullaby for the working class. 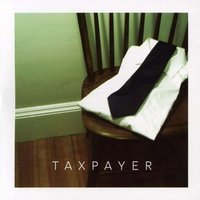 Taxpayer - I'll Do My Best To Stay Healthy