Quinn Marston wants to know: Can You Hear Me See Me Now? The 20-year-old singer/songwriter's striking debut crackles with the urgency of someone aching to be heard, merging crisp popcraft with ramshackle energy and raw, enigmatic lyricism. Would you like to hear me now, Quinn asks in the title track, with my feelings bleeding out? Based on this astonishing introduction, the answer is a resounding YES.

Marston grew up in suburban Cortland Manor, New York, among a family of "complete music junkies," including her mom, a classically trained pianist and prolific singer-songwriter. As such, Quinn began singing and writing "really grungy songs" at a ridiculously early age, inspired by the likes of such 90's heroes as Nirvana and Garbage. Armed with her own edgy original songs, she began playing gigs, supporting her mom's solo shows at coffee houses around Westchester.

Marston grew into her angst as she hit her teenage years, becoming both "very intense and very driven." She earned a full ride scholarship to Hunter College and moved down to NYC to study art history while simultaneously pursuing her musical inclinations.

Despite her innately reserved nature, Quinn began letting the world hear her songs, first in an indie-rock trio dubbed Sumo and then on her own as a solo artist.

In 2009, Marston entered into a collaboration with producer Tom Beaujour, known for his work with such bands as Nada Surf, Right on Dynamite, and The Virgins. Working at his Nuthouse Recording in Hoboken, New Jersey, the two fleshed out Quinn's songs by assembling a crack backing combo comprised of veteran power pop players, including members of Beaujour's own acclaimed combo, True Love and guitarist Tim Foljahn (Two Dollar Guitar, Thurston Moore, Cat Power).

Together Marston & Co. have created a short, sharp set of classic jangle-and-crunch alterna-pop. Though undeniably buoyant and hook-happy, songs like "Articulation" and "So High" still carry a bit of an emotional sting born of Quinn's direct yet intimate lyricism. As she sees it, if she can't wear her heart on her sleeve, then what's the point?

"I'm a big fan of emotional honesty," Quinn says. "Art is a place for disclosure. A lot of my friends have different views. They argue that it's bad when art is too much like a journal, but I disagree. I feel like art should be the one place where people can be really, truly honest. That's the beauty of rock 'n' roll for me, it's this place where you can let everything hang out."

Having graduated in May 2010, Quinn is now devoting herself fully to letting it all hang out. With the release of Can You Hear Me See Me Now?, she has officially embarked on an amazing journey she can't help but see as somewhat frightening, thrilling, and fun - just like her music.

"It's a completely scary endeavour when you commit to just attempting to be an artist," Marston says. 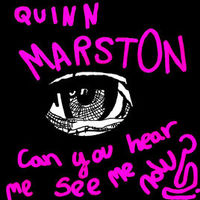 Quinn Marston - Can You Hear Me See Me Now?