"Pigeon Pit's folk-punk twang is as raw as it is rambling, but never reckless in its tender heart.” - NPR

Oleander’s folk-punk poetry glitters under gas station lights, weaving together themes of grief, codependency, political struggle, gender, self-love, and adventure. She tells stories that abandon traditional modes of time and linear narrative to reject a reality that is ever-increasingly defined by work, isolation, and detachment. Through the people she loves, she imagines a better place:

Kiss your crooked teeth, the trestle of your grin
A monument to a world worth living in.

Oleander, born in Santa Cruz, California, combines vivid imagery and near-frantic lyrical density in a self-described “journaling of queer survival, trauma, and the labyrinth of experience.” Pigeon Pit’s raw, dream-like songs channel Lucinda Williams and the Mountain Goats, played on a well-worn mix tape in a dark alley that sparkles with shattered glass.

Oleander’s performances range from solo acoustic to the six-piece country-influenced instrumentation of her first release in five years, Feather River Canyon Blues. The album was digitally self-released on New Year's Day 2022 and is now being made available on vinyl and cassette via Ernest Jenning Record Co. 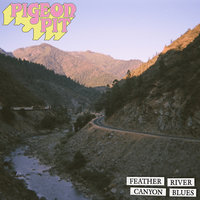