Million Lands is drummer Kid Millions (Man Forever, Oneida) and trombonist/guitarist/electronic manipulator Benjamin Lanz (Beirut, The National). A collaborative, co-compositional duo, Million Lands has long history beyond the release of their first record, The Ochre World, would suggest (including time in a Division 1 basketball pep band! in 2003). But it took some years for Kid and Ben to settle into a regular basement noise hang.

What came out of these rolling-tape sessions could be described as a post-instrumental haze of dubbed out, free referentialism touching on a myriad of reference points - from Bitches Brew to Disintegration. Kid and Lanz have made a priority out of subverting traditional approaches to their instruments and weave this energy together for their first mind-blowing release on Ernest Jenning Records. They will be doing a number of shows to support the album after it's April 24th release. 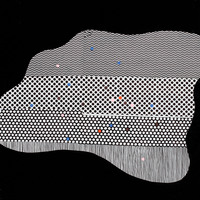