Health is real American music. The weird, old music of drunken colonists, steel bit confederates, self-educated gentleman slaves and whiskey-stained maps followed upside-down. As long as parts of America remain wild (both the landscape and it's tenants) this music will be around and bands like Health will play it. The germ of Health formed when Jonathan Moore, a young song-writer from Maryland, split from the green, green campus of Guilford College in Greensboro, NC (a school based in one of the most American of traditions: Quakerism - existential Christianity with a history of civil disobedience, the religion born with our freedom and the one that couldn't quite contain Dick Nixon). After a month or two of study and academia, Moore packed up his acoustic guitar and hitchhiked west and kept south, dropping down into Mexico. Busking, working odd jobs and keeping in motion he began adding to an already sizeable arsenal of American folk songs - those of Mexico and as he kept moving South, those of the people of South America. After an undetermined amount of time he returned with new songs, a new and deeper understanding of music and a very different outlook.

Upon his re-arrival in Greensboro he began to lurk about his old, forsaken college home, looking up musicians he had met that first semester. He first hooked up with keyboardist Anna Murray whom he caught one evening in some residential hall parlour playing Emmet Miller's “Big Bad Bill (Is Sweet William Now)”. Murray not only matched Moore for knowledge of traditional music but she was just as comfortable with the by now entrenched tradition of College Radio (Guilford's station was perennially esteemed). Her unique style being a modern customization of what she had learned in the gray hills of her Kutztown, PA home. Shortly after, they added drummer Marc Bernstein who was from a little farther South and had already made a name for himself by literally burning giant scenes of American life into slabs of wood as well as for playing with the mysterious band Softward. (At one point the aforementioned pyrographics adorned the walls of every beer joint in Greensboro worth it's watery domestic). Bernstein held down rhythm duties with the only member of Health who did not, at some point, attend Guilford College. Mark Wingfield's arrival on the Greensboro scene was rife with a certain amount of ambiguity - some say he came down from a fancy northern college, some say the coast of Italy (where he supposedly assisted on archaeological digs), others say he was a regular haunt of the trailer parks of Buckhannon, WV. I talked to members of the band who swear all three are true. After playing as the four piece for a while, Moore enlisted another school friend, professional guitar instructor and amateur ornithologist Eben Dennis. No less steeped in the traditions of American music (having learned it from the birds and foxes while wandering the meadows and leas of his North Virginia home) Dennis’ electric finger picking rings of the first days of guitar music, making the trip from Spain to Hawaii to his Virginia on the four fingers with smacks of the blues on his thumb.
In the beginning Health performed songs that were minimal and understated. Lyrics stretched for ages between choruses that pounced. Moore's vocals and guitar intertwined with Murray's keyboards vertical miles above Wingfield's four-string and Bernstein's God's Metronome of a bass drum. Some time after Dennis joined up, however, the songs and sound began to change. Bernstein began to play with what appeared to be either reeds or cat-tails, presumably picked from the banks of Greensboro's Buffalo Creek or Lake Townsend. Lyrics began to pertain to sun drenched trails, golem-like mud births, the endless American highway, baby birds and lions with blood drying on their jaws. A battered, vintage Gibson replaced Moore’s acoustic. While the college radio had by no means been turned down; the ubiquitous bourbon of the South and the cannabis sativa of the Carolina mountains had found spaces between the instruments - gumming up piano keys with the smoke of a thousand campfires and slicking down guitar necks with spilled bottles of a thousand midnight hootenannies. At this point the band was found in the basement studio of the Werehouse collective in Winston-Salem, stomping on a vast array of homemade foot pedals and splashing red wine about the walls. What resulted is surprisingly true to their nature for something not recorded to wax cylinder but plastic disc via binary code. Some time between the sixties and seventies, bands like the Flying Burrito Brothers and the Byrds tried not so much to recapture but to give light to an American music that was not Country or Soul or Rock and Roll. These bands which began with so much promise, sadly begat us the mellow sleaze of the Eagles. Now Health slips comfortably into that same tradition of weird American music and we have far less fear of that promise being corrupted. They are dug far too deep in the swamps, briars, mountains and deserts. They won't lose their way but you may get lost. 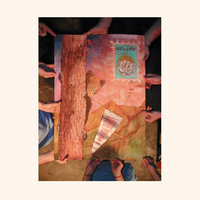 Health - Where You From?