The road has been long for the ClawMan, David Rogers-Berry, best known as the savage drummer for NYC's insatiable mountain-punk quintet, O'Death, formed in 2003; with several albums and miles of tour beneath his belt, he has now released a solo project that has taken a lifetime to create.

David earned the handle ClawMan from his father and his biker-brethren at the age of three, a moniker that he would wear proudly throughout the years. Decades later, the ClawMan would be dealt a series of tragedies, with the sudden passing of his fiancee in 2007, followed by a diagnosis of osteosarcoma, a primary form of bone cancer, in 2009. Through the pain and complication, songwriting, to him, would become "a way to process these life changing events, but over time the work has evolved to be a creative outlet and statement, and not just a way to deal with the hardships."

The song-writing project would take on a different light when David brought his material to be recorded with long-time collaborator and engineer Dan Sager, who has appeared on three different O'Death records, playing the euphonium. Both play a variety of instruments on the EP, and the project has grown, as the two share writing and engineering duties to form a comprehensive production team.

The journey to record seemed just as winding. The four-song EP was multi-tracked at Sager's home studio in Tillson, NY, relocated to West Hurley, NY, and finally ClawMan's recording operations have found a new home at Dirty Claw Recordings at The Chalet in Big Indian, NY, where the two focus on the upcoming ClawMan LP, develop a live show, compose scores for video projects (see Adventures of a Space Traveler by Seth Fried), as well as performing and recording with New York's, The Icebergs, another band for whom Rogers-Berry provides percussion, and is producing for an upcoming record (TBA).

Tillson Tapes begins with the track HATE, an eclectic anthem concerning a seemingly Zarathustrian struggle for purity of mind, and is followed by the melodic Baby Jewels, exploring that dreamlike place between horns and strings. Cry Cry Cry takes us to a songwriter's paradise before the record culminates in Fanfare for the Clawman, an instrumental worth a thousand words, seemingly reflecting life's duality of triumph and tears, reminding us that, like life, the claw's caress is both scathing and sweet. 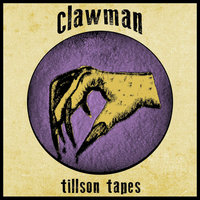