The Most Distant Object

I’m watching a boxelder bug that has inadvertently gotten itself stuck inside a bag of guitar picks on my desk. Every couple minutes he flaps his wings, making a splitter-splatter sound against the clear plastic. It looks pretty lonely in there, and it’s pretty likely he won’t get out alive.

I haven’t asked them, but after listening to The Most Distant Object's self-titled debut album, I am pretty sure Jason Harvey (Dianogah) and Tom Fitzgerald (C-Clamp) felt the same way in 2020. They’ve known each other for nearly three decades, and already play in a rock group called Whelms (along with Harvey’s Dianogah bandmates Jay Ryan and Kip McCabe). At some point after the world shut down, they decided to create music together (while apart) over the internet.

And goddammit if it doesn’t capture that beautiful loneliness and entrapment. It’s like a John Hughes movie. It’s like rediscovering New Order, Talk Talk, Devo and the Cure. There are familiar components here that hearken back to the crystalline post-punk and indie rock of late-90s Champaign-Urbana and Chicago - Fitzgerald’s effortless guitar riffage; Harvey’s melodic, pulsing bass. But now there are also synthesizers and electronic percussion casting a haunting shadow that perfectly supports the lush, thoughtful vocals. What started out as a couple ideas, shared back and forth between laptops, quickly flourished into 11 songs.

To round things out, Harvey and Fitzgerald enlisted some help from their friends. Nora O’Connor (Neko Case, Andrew Bird) lends her vocals to “Ghost” and “Dark Spader”. The album, largely self-recorded, was mixed by Mark Greenberg (Eleventh Dream Day, The Coctails) at The Loft, Wilco’s Chicago headquarters and home studio. To perform these songs live (and to confuse everyone) Ryan and McCabe were brought in to help.

As I watch this bug continually fail in its attempt to escape from the bag, I realize that unlike him, we’re going to be OK. And these songs are the proof. 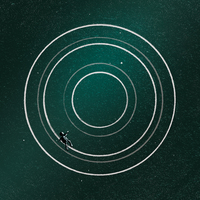 The Most Distant Object - S/T