Michigan-born songwriter Fred Thomas has been performing, recording and releasing records in one form or another at a non-stop pace since his late teenage days, always in a manner flying just below most people's radars. Consistently embracing a grassroots or d.i.y. approach, Thomas has fronted bands like City Center and Saturday Looks Good To Me, while appearing randomly as a support musician for vast amounts of acts as diverse as K Records founder Calvin Johnson or obscure witch-folk band Wiccans. Rather than pushing for visibility or facebook likes with a singular focus, Fred is concerned with writing songs and exploring new sonic possibilities on a very personal scale, and nowhere does this insular world come into light more than in his solo material. Beginning in 2001, he began releasing limited run CDRs and impossibly obscure 7"s under his own name, touring living rooms and punk venues on his own in between tours for other projects. His dusty, strange singing voice and often spare arrangements lean on a fragmented approach to folk music, melding weird electronic textures or production trickery with acoustic dirges or remotely hopeful looks into the future. With seventh album "Kuma" (named lovingly after Fred's dog and also as an incidental reference to Neil Young's "Zuma" album) the songs rely on skeletal arrangements of piano, acoustic guitar and organ, offset by unhinged guitar solos and Fred's heart-crushing melodies. The overall vibe feels like the blank, quiet 3am moments following a crazy night, and the first exhalation that comes when you're finally alone again. 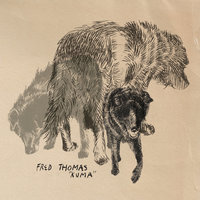